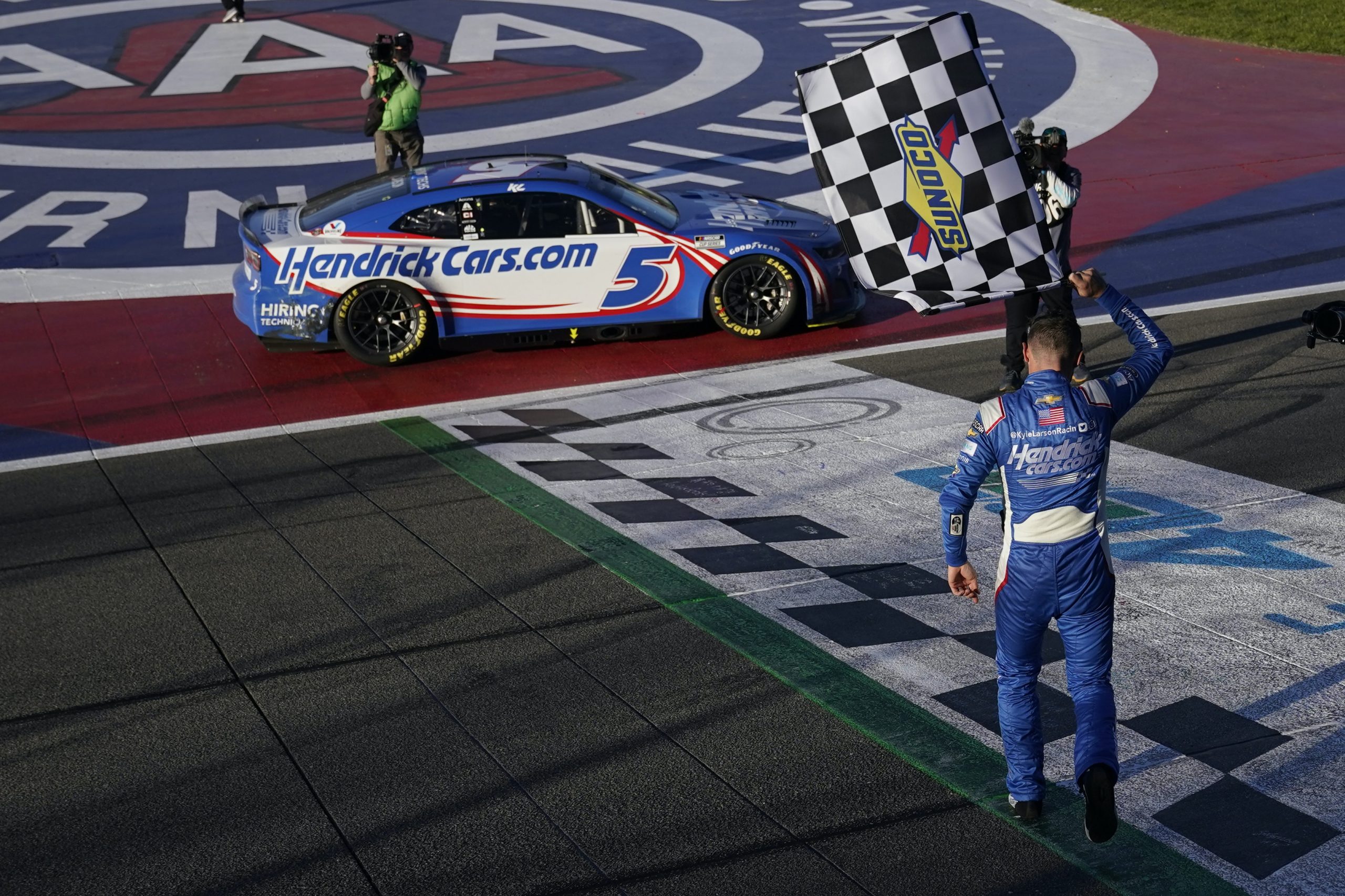 After a dramatic restart with four circuits to go, the defending series champion held off late assaults from Austin Dillon and Daniel Suarez to win his first race in Fontana, California, since 2017.

“It’s always fun to win in the home state,” Larson, an Elk Grove, California native, told Fox. “Hard work all weekend there. Didn’t feel great in practice yesterday. (Crew chief) Cliff (Daniels) and everybody made some good adjustments overnight and the car handled a lot better.”

With three circuits left, Suarez charged up to pinch Larson high on the exit of Turn 2 to recover the lead. Larson was back on his inside by the time they returned to the start/finish line, clearing Suarez’s No. 99 car for the lead in Turn 1.

“We’re going to win a few races very soon here,” Suarez told Fox. “I just can’t thank everyone enough in my team. We had a fast car, but we went through a lot of adversity. We had a few issues. We hit the wall once. We had an issue with a diffuser. My pit crew, those guys are legends; it’s unbelievable.”

Chase Elliott’s spin off Turn 2 with eight circuits remaining triggered the final restart. With 21 laps left, Elliott was on the outside of a three-wide battle for the lead with Joey Logano and teammate Kyle Larson down the frontstretch. Larson leaped high to stop the run, but Elliott’s No. 9 Chevrolet was already there and hit the outside wall instead.

Elliott had come back from a two-lap behind after a spin on lap 38, seven laps after colliding with the wall as the lead driver. Elliott came in 26th place, two laps down.

Erik Jones, Suarez, and Logano rounded out the top five.

On Sunday, the caution flag was raised a total of 12 times, tying the previous high of 2008. Following a total of ten accidents in Saturday’s qualifying sessions sessions, ten of the 12 yellows were for on-track accidents, which was unsurprising.

Dillon’s Richard Childress Racing teammate Tyler Reddick won both of the first two stages and led a race-high and career-high 90 laps on Sunday. However, with 49 circuits remaining, the Richard Childress Racing driver had a flat left-rear tyre. William Byron swerved to avoid Reddick leaving Turn 2, but lost control and collided with Reddick, putting an end to Byron’s day and severely injuring Reddick’s No. 8 car. In the end, Reddick came in 24th place.